“In countries where ‘civilized,’ adulterated foods are not used, there is no cancer, no tuberculosis, no pneumonia, no heart disease, no diabetes, no arthritis to speak of…It seems that only a liberal use of white flour and white sugar can cause the extraordinarily high death rate so obvious wherever these foods are common.”

It’s that simple. While we’ve been told that maladies such as heart attacks, cancer, diabetes, obesity, mental illness, ulcers, constipation, and even tooth decay are a normal part of life, in truth these afflictions were barely known to the human race before industrial food processing was introduced to the world. In fact, they appeared so predictably in every new population that adopted processed foods last century they were dubbed the “diseases of civilization.”

Early nutrition research pointed squarely to the vitamin and mineral deficiencies of industrial foods as the reason for humanity’s new plagues. “Because of the denaturation of foods by refining and processing,” Dr. Royal Lee wrote in 1942, “we are overeating the fattening and energy-producing components in foods and literally starving for the vital vitamin and mineral factors.”2

As you might expect, the fact that processed foods kill people was not welcome news to industrial food manufacturers, who for over a century have suppressed and subverted the truth about their products. But there was another group equally hostile to the conclusions of the upstart science of nutrition. Medicine, convinced that germs cause most disease and pharmaceutical drugs are the answer, scoffed at the link between diet and health.

“It is wholly unscientific to state that a well-fed body is more able to resist disease than a less-well-fed body,” testified Dr. Elmer Nelson, MD, head of the “nutrition” division of the Food and Drug Administration, in a federal court in 1949.3 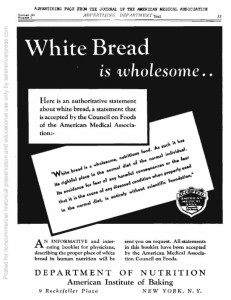 Advertisement from a 1920s issue of the journal of the American Medical Association. The AMA struck a deal with flour refiners to promote the healthfulness of white bread despite admitting that most practicing physicians had “a very poor opinion” of it. [4]

Dr. Nelson’s words bespoke a very real and powerful alliance between the American Medical Association, industrial food manufacturers, and their agents in the federal government—an alliance bent on keeping the public blind to the grave truth about processed foods and disease.

In 1929 Dr. Lee walked straight into the crosshairs of this collusion when he introduced a raw food concentrate designed to supply the vitamins and minerals missing in America’s diet. The supplement was so effective in relieving chronic illness—particularly heart disease—that within just a few years and without any sales promotion it had attracted a customer base of nearly twenty thousand physicians.

Little did Dr. Lee know that this success would “bring down on my head a club wielded by the United States government,”4 as he later described it—an act “apparently instigated by organized medicine.”5 Thus Dr. Lee was forced to fight the first of decades of lawsuits brought against him by the FDA for the “crime” of helping to restore normal functioning of the body using food instead of pharmaceuticals. 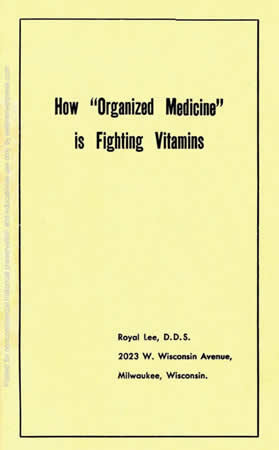 In How “Organized Medicine” is Fighting Vitamins, Dr. Lee candidly chronicles his persecution by the FDA. Publishing this book was a supreme act of courage in a time when nutritionists were jailed for speaking the truth about processed foods.

Sadly, Dr. Lee was not alone. Throughout the twentieth century, any health practitioner claiming that whole foods help alleviate physical imbalance or that these foods are nutritionally superior to processed ones was legally hounded by the FDA and publicly discredited by medical officials—a tactic that, as any reader who has attempted to procure or sell raw milk knows, continues today.

One reason conspiracies succeed is the public deems them too preposterous to be true. The notion that medical officialdom, industrial food processors, and the federal government have colluded for nearly a century to suppress the fact that processed foods are the cause of most of our health problems may sound outrageous, but as Dr. Lee fearlessly documented throughout his life, this is precisely the case.

REFERENCES
The following sources can be found—free and in their entirety along with over a hundred more writings by Dr. Lee—at the Selene River Press Historical Archives. For more in-depth works by Dr. Lee, visit the Dr. Royal Lee product page at seleneriverpress.com.